Revision as of 09:58, 12 December 2021 by XymphBot (talk | contribs) (→‎Speedrunning: Automated edit - Update DSDA map records)
(diff) ← Older revision | Latest revision (diff) | Newer revision → (diff)
A checked version of this page, approved on 12 December 2021, was based on this revision.
This level occupies the map slot Z1M5. For other maps with a non-standard slot, see Category:Non-standard map slots.

Z1M5: Phobos Lab is the fifth level of Knee-Deep in ZDoom. It is a reimagining of Doom's E1M5: Phobos Lab with new areas and enemies. The primary designer was Daniel Gimmer (Tormentor667). The par time defined in MAPINFO is 11:00. 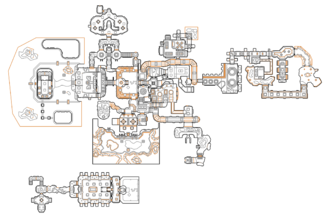 Push past the imps and dark imps in the starting area to collect a chaingun (and shotgun on Hurt Me Plenty (HMP) skill level or higher), then enter the building and go through the door on the other side of the bridge. Turn right and head into a tunnel with yellow and gray strips then go round the corner to find a radiation shielding suit; take this item then drop into the nukage and swim to the south-east corner to find a tunnel that you should follow until you surface inside a cavern. Flip the switch on the north wall then head south and step through a gray tube to a second cavern with dark imps. Follow the cavern east and south until you reach a door with a stone imp in front of it, then go through and turn right to see some shadows guarding a switch. Flip it then return to the gray tube and head west until you can jump up to a platform where a shotgun guy is guarding a button. Press it to open the nearby door so you can return to the starting area.

Head north up the stairs then turn right and open the door in front of you; the walkway leads to a passage that contains shotgun guys and an imp on HMP or higher. Follow the passage until you reach a window with a medikit and clip under it, which will open a door behind you concealing the red keycard. Take the key then head back down the stairs and turn right to go through a red key door, which leads to a nukage pool surrounded by several zombies. Open the west door and kill two demons waiting behind it on Ultra-Violence and Nightmare, then step on the platform behind the door; it will carry you down to the next room after a short delay. Head down the south staircase then go round the corner and open the door on your left to find a radiation suit; pick it up then drop to the bottom of the nukage pool and swim north-east to an opening in the wall. Swim to the surface once you go through the opening and head south to find a switch that will power a door elsewhere in the level.

Swim back into the previous area and be ready to kill some shotgun guys, imps and demons that have teleported in, then head back up the stairs and use the platform to return to the outdoor area. Head east across some stepping stones to an octagonal doorway then go up the stairs and through the split door on your left (which you powered earlier) where several zombies, imps and demons are waiting. Head east through a hall with flashing computer panels and press the button in the south-east corner to open it to enter a green tube, then follow this tube past several enemies and the orange and silver key doors - you will eventually reach a chamber containing the orange keycard (the switch next to it opens a door leading back to the area you can see through the window, but it is not vital to progression).

Head back along the green tube until you see an orange key door on your left and go through it to find a room with several monsters, including two blood demons and a Hell warrior. Use the lift on the north side of the room to reach the upper floor then go through either doorway to find the silver keycard being guarded by Hell knights. Take the silver key and go back to the green tube, then follow it east and south to a silver key door; after walking through this door, head east and north past some imps and mauler demons then enter a corridor and follow it until you see a nukage pool on your right. Flip the switch on the south wall to open a submerged gate then take the radiation suit next to it and dive into the nukage, swimming through the tunnel until you can surface in a cavern with imps (plus a Hell knight on HMP or higher). Head south into another corridor and follow it east past some demons and imps, then enter a second cavern with some dark imps guarding a rocket launcher. Continue north into a passage guarded by shadows and you will reach a room containing (depending on skill level) a satyr, Hell knight or baron of Hell. Go through the doorway to the south to find the blue keycard, then flip the switch by the west door to open it and return to the nukage pool you dived into earlier.

Return to where you found the orange key then head north down a slope and open the blue key door at the bottom. Kill two soul harvesters and flip the switch behind them, then follow the hallway west past some dark imps and more harvesters until you reach another blue key door leading back to the nukage pool on the west side of the level. Head through the now-open west door and go straight forward to the building in front of you, open the door to confront some shotgun guys and troopers then head through the north-west doorway and go down the stairs to an underground chamber with dark imps and a backpack. Head east through a tunnel with a cacodemon and two more dark imps, then go through either door to a large nukage room with chaingunners, blood demons and shadows. Cross the room and open either door in the east wall to find two Hell knights guarding an alcove containing the yellow keycard.

Head back upstairs and return to the nukage area on the west side of the level, then go back through the blue key door and head north through another door that requires the yellow key. Kill the waiting soul harvesters then head north under an open door to a dark hall with several demons and mauler demons (the door shuts as you walk under it). Go to the north side of the hall to find an exit door, kill one more blood demon waiting behind it on HMP or higher then flip the switch to finish the level.

Open the door opposite the red key door to find an armor and shotgun shells. Interact with the computer terminal in this room to spawn a berserk pack.

A megaarmor and a box of bullets can be seen on platforms in the nukage area on the west side of the level. You can reach them by carefully walking up the sloped walls either side of the nukage.

After going down the stairs to the underground area leading to the yellow key, open the south door to find several imps, shadows and soul harvesters guarding a megaarmor.