Difference between revisions of "ZDaemon" 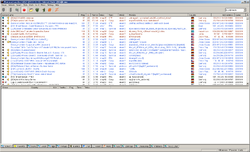 ZDaemon is a multiplayer-focused source port based on ZDoom for both Windows and Linux/Unix (server only at this time). The current stable release is 1.10.19 (2021-05-17). ZDaemon was originally derived from ZDoom v1.23, which was one of the last major versions of ZDoom before moving to its current 2.xx codebase. It includes some of ZDoom's advanced features such as the majority of line types, sloped lines, and deep water, but lacks some later implementations such as DECORATE, flat and texture mixing, and other similar features. ZDaemon features an enhanced network code suitable for client/server games, stats and experience collection, teamplay support, and a Capture the Flag mode.

Hexen is now mostly supported. Getting the rest completed is on the project roadmap.

The voices used for announcements of most CTF/Deathmatch/Team Deathmatch games were taken from Quake III Arena and Unreal Tournament. They were compiled together by the creator of the WADs zvox.wad and zvox2.wad, and are subject to change with time. There are also some custom soundpacks which are made and maintained by individual authors, and also subject to change at any time as they are independent of the main development team.

The ZDaemon user community, while not formally part of the ZDaemon development program, plays a huge role in the experience of playing ZDaemon online. It features many discussion forums and many avenues to begin contributing content, and the ZDaemon team itself hosts and maintains many related resources to ensure cohesion and interoperability.

The community's discussion and gaming services include:

ZDaemon has scheduled gaming sessions each week, such as "Tuesday Night Flags," which is a weekly Capture the Flag game; "Thursday Night Survival," a weekly cooperative game where each player has a limited number of lives per round; "Friday's Monster Mash", a weekly cooperative game where players have an unlimited number of lives/respawns; "ZDaemon Sessions," which is where the staff and/or community chooses a wad/map to play each Saturday; and "Frag Your Brains Out," which is a weekly free-for-all deathmatch run every Sunday.

ZLauncher is a specialized launcher created specifically for ZDaemon. It provides an official list of currently available servers for people to play on. It also features a buddy list, GetWAD (automatic wad downloading), a quick link to ZSW (the server wizard) from the menu, a WAD file setup utility, demo recording, playback utilities, a built in chat lobby (based on IRC), and embedded forum access. It is maintained by team member Kilgore.

This is a relatively new utility for creating a ZDaemon server.

This is a modular IRC client created by team member Kilgore which was designed for use with the ZDaemon IRC chat server. It can still act as a general-purpose IRC client. When used within ZLauncher, it automatically joins ZDaemon's IRC server, enabling users to chat other players who are logged in to ZDaemon. zrc.exe is a standalone version of the client which can also be used to access ZDaemon's IRC server, however the user must provide their master server account password on the connect line as the IRC server's password in order to connect.

This is a modular utility created by team member Kilgore that searches various repositories for third-party (WADs or .pk3 files for example), which it then downloads and extracts to the user's specified directory automatically.

ZDaemon provides server binary builds for Linux and FreeBSD. During the 1.09 beta phase a Mac client was available for testing. An official Linux and Mac client release is planned for 1.10 or later. There is however a supported version of Lyfe's ZDaemon MacOS project that you can use. Until the arrival of a native client, users may play using emulation software such as WINE, Cedega or CrossOver. Playing using this software is allowed.

For the most part the ZDaemon team has managed to keep cheating relatively under control through closing the source, regular security updates, and surveillance (for instance, demo recordings are often demanded during competitive tournaments to combat cheats like aimbots or wallhacks). ZDaemon contains also some kind of cheating detection system which detects third party cheat applications.

Public accusations of cheating (whether founded or not) are frowned upon as unnecessary public disturbance, with Raider once calling it a form of harassment. For this reason, it is usually requested that such reports be relegated to a private dialog with a member of the staff. The administrators maintain that they ban only when given clear evidence by their cheat detection system and stand by their policy.

The initial ZDaemon release inherited csDoom's conflicting licenses, which made it impossible to legally assign either the GPL or DSL to the codebase. This conflict was resolved in ZDaemon 1.0 when the GPLed parts of the source code were rewritten and the project was again under the DSL, which it inherited from the ZDoom 1.22 codebase. This change allowed ZDaemon 1.0 to to include BUILD licensed code from ZDoom 1.23.

Starting with the ZDaemon 1.07 release in July 2005, the development team stopped releasing the source code due to numerous exploits and cheating incidents. Unlike the GPL, the DSL does not forbid closing the source code. This action caused some free software friendly people to distance themselves from the ZDaemon community, criticizing the move as a form of security through obscurity, though it makes development of cheats more difficult through the implementation of anti-cheating methods. The move also makes development of alternate ZDaemon clients and servers impossible, which is uncommon in the Doom community given that most ports make their source code publicly available. Skulltag, a formerly closed-source multiplayer-oriented source port, faced the same criticism until it was opened in February 2012.

The developers have stated that anyone wishing to develop a new feature or bugfix may do so using the older ZDaemon 1.06 codebase and submit it to the core development team for inclusion.

The ZDaemon master server will only advertise servers that enforce a ban list controlled by the ZDaemon staff. Servers that do not enforce this ban list are not shown to users. The effective result of this is that the ZDaemon staff have the ability to ban anyone they choose from all ZDaemon servers advertised on the master. No ban list (or other) restrictions apply to servers not advertised on the master. While this allows the removal of cheaters, the mechanism used can occasionally block innocent players as well due to matching dynamic IP ranges. Nevertheless, it is a common banning method used by other multiplayer Doom ports and many online games in general.

Ban appeals, especially those of bystanders caught in the range bans of others, often end up as over-dramatized forum posts. For this reason, it is usually requested that such appeals be relegated to a private dialog with a member of the staff.

Doom source ports require a Doom IWAD file which contains the graphics, levels and other media that are used in the game. These IWAD files are still copyrighted. This means that although source ports can be freely downloaded, users must still buy a copy of Doom in order to play. ZLauncher, IDE and IDEse (Internet Doom Explorer, Skulltag Edition) allowed GetWAD to automatically locate and download any WAD files, including IWAD files, without restrictions. ZDaemon never officially condoned any form of piracy, yet some people took issue with the downloading of IWADs [1]. More recent versions of ZLauncher and IDE block the automatic download of commercial WAD files.

ZDaemon staff member Doom2pro released a trojan program, purporting to be a ZDaemon cheat, in a global cheat development forum to trick regular cheaters to download it. When run, the program would inform Doom2pro and delete the ZDaemon folder from the user's computer. Although Doom2pro acted independently of the rest of the ZDaemon staff, ZDaemon has nonetheless been criticised for his methods.