Difference between revisions of "ZanZan" 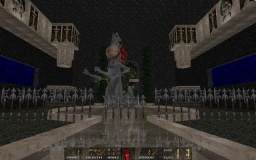 ZanZan is a total conversion created by Edmundo Bordeu of ACE Team. The music is written by Peter Tomaselli (Kniggit). It requires Doom II and ZDoomGL (v1) 0.66 to run, however an adaptation to GZDoom was later created by Pawel Zarczynski (NMN).

Avedusa
The first thing you see; a dying Avedusa. This replaces the Icon of Sin's monster spawner.
Cattle monster
A lizard-like monster, which is killed by beheading. It replaces the demon. A partially invisible version of this monster exists, replacing the spectre.
Zester
Once followers of ZanZan, the Zesters now rebel against his decision to destroy earth. The standard zester replaces the imp.
Zester priest
A zester priest replaces an arachnotron.
Touriaam
Touriaam the great, is a stronger version of the Zester priest. This replaces the spiderdemon.
Zidivist
Zidivist, inventor of the fire orbs, is a very important Zester. This replaces the cyberdemon.
Senorgen
These are the small plant creatures who give you tips through-out the wad. They replace the cacodemon or the pain elemental.
Living mug
These are large walking vases. They replace the zombieman.
Spider critter
These small spiders replace the Hell knights.
Koocayam
Koocayam the keeper of knowledge is the end boss in ZanZan. He is the son of Retafnayam, who discovered Earth. Replaces the arch-vile.