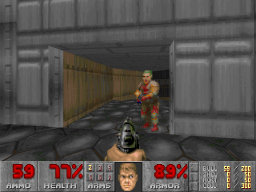 The zombieman (also known as former human in the game manuals) is the least powerful type of human which has been turned into a zombie during the invasion from hell. The monster appears as a man in a bloodied tan utility uniform and body armor, carrying an assault rifle. Their hair has an unusual greenish tinge, perhaps stained with green slime or even caused by a palette error when converting the image to Doom's image format.

The zombieman is armed with a rifle that fires bullets that are slightly less damaging than the player's bullets. When the zombie attacks, it aims its rifle at the player for 10 tics and fires a single pellet. The zombieman's weapon has a wide dispersal (standard deviation around 9°, to a maximum of ±22°), and will most likely miss at medium to long ranges. After firing, the monster moves again.

The zombieman is generally considered the least dangerous enemy in the game; no other monster (excepting the Commander Keen) has a lower movement rate, hit point total, or average damage per attack. When killed, the zombieman drops an ammo clip containing 5 bullets (or 10 on I'm too young to die and Nightmare!); if he subsequently respawns or is resurrected, the clip remains.

Unless in poor health, an armed player should never need to back down from a single zombieman, although large groups can slowly drain the player's health during the time it takes to kill them all (as in Evilution MAP09). The dispersal of the shots from its rifle means that it is barely a threat at medium to long ranges. In an emergency, or when conserving bullets during a Tyson run, the fist is effective in the short term if the player's footwork is good (two blows will usually knock one down, while a single berserk attack will certainly finish it, often gibbing it).

In Doom 64, they use a visual appearance that is similar to the Vanilla Doom looks, but instead their rifles look more like shotguns and their suits are colored blue-grey.