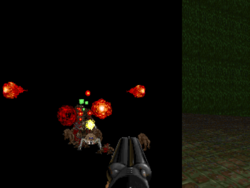 Monsters in the void on the final level of Doom II.

The (0, 0) respawning bug was a bug that existed in all official releases of the Doom engine. When a monster is spawned during play rather than at level start, it has no corresponding mapthing, so the mapthing fields inside it are all set to zero. When the code that performs "Nightmare!" skill or -respawn monster respawning considers such a monster, it will be respawned at the point (0, 0) regardless of that point's nature.

This bug was first widely noticed on Doom II's MAP30: Icon of Sin, where if the player remains in the level for a long enough time, huge numbers of monsters will appear in the void to the left of the valid map area.

This bug is repaired in various recent source port versions. The first to include such a fix was the Eternity Engine by Team Eternity, by allowing such monsters to respawn at the point they died instead of the (0, 0) location. Fixes were later adopted by several other source ports, including PrBoom, which adopted the method used for the Eternity Engine and ZDaemon. In the case of ZDaemon, the issue was resolved by giving all dynamically-spawned monsters the "dropped" flag, the same as used on dropped weapons, to prevent them from respawning.