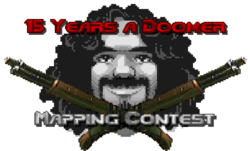 15 Years a Doomer was a mapping contest held from March 22 to March 29, 2021. The event was organized by James Paddock (Jimmy) to celebrate his 15th year anniversary in the Doom community.

A total of 43 entries were accepted.