2002 A Doom Odyssey is a 2002 megawad for The Ultimate Doom which replaces all four episodes. The project was organized by Paul Corfiatis, who designed most of the levels, and also composed the megawad's soundtrack.

A sort of demo version with just the first episode was released on December 20, 2000. Back then, the planned name was 2001 A Doom Odyssey. The megawad itself, properly speaking, was first released on July 24, 2002. A second version was released on August 30, 2002, with changes to E1M3, E1M5, E2M2, E4M2, E4M5 and E4M6, as well as an additional level that can only be reached when the megawad is played in a ZDoom-based source port.

In 2003, it was listed as one of the top 10 WADs of 2002 in the Top 100 WADs of All Time article series during Doomworld's celebration of Doom's 10th birthday. July 30, 2004, a third version was released, with fixes to the megawad's MAPINFO lump, allowing every episode to be completed in ZDoom, as well as various fixes to certain levels. In addition, the entrance maps (E2M5 and E2M4) of episode 2's secret levels (E2M9 and E5M1, respectively) were switched but the exit maps of the secret levels were left unmodified, resulting in gameplay problems. See the glitch with secret levels for more information.

For the tenth anniversary, a new update was released on July 27, 2012, though with a different file name (2002ad10) so as not to replace the previous. It added another new level and reshuffled some existing ones again. A minor bugfix for this tenth anniversary edition was issued on August 2, 2012.

This WAD features four built-in demos. All require Ultimate Doom v1.9 to view them. Note that DEMO1 desyncs, presumably due to changes in the level after the demo was recorded. The demo levels are: 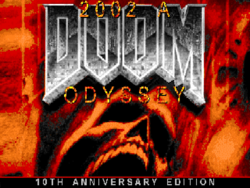 The 2012 update replaced the rather amateurish endgame screens and intermission pictures with screenshots of the levels. It also renamed episode 4 from "The Search for Stephanie" to "Torment Ultima". The original E4M1 was replaced by a brand-new one, E4M9 was shuffled to E5M2, E3M5 was shuffled to E4M9, and a brand new E3M5 was added. The original MIDI soundtrack was slightly tweaked, and ten new songs were added to give episode 4 its own original soundtrack. Some of the levels were subtly renamed.

E3 was also given a second secret level when the Wolfenstein level was moved out of E4. Exits here also head back to the correct levels.

The problem was fixed in the tenth anniversary edition, where E2M4's secret exit was changed to send the player to E5M1 again, while the hidden exit of E2M5 was edited to lead to E2M9. Thus, the secret levels caused no more disruption in the progression of the episode.

The table shows the arrangement differences between the megawad versions:

Note that the dates listed for both V2 and the 10th Anniversary Edition are misleading, as the files themselves are the third version and the August bugfix, respectively.