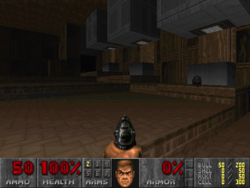 Original start room of MAP01, revealed for the first time by the release.

In April 2015, John Romero released a large amount of Doom development assets on the Doomworld Forums, much of it previously unseen.

Romero's first release was the NeXTStep Objective-C source code to DoomEd, the original editor used by id Software's level designers to create the levels for Doom, as well as other Doom engine games. The release occurred in response to a discussion thread titled, "Don't you wish we had DoomEd?" where fans had expressed disappointment at the fact that the DoomEd source had never been released.[1]

Chocolate Doom author Simon Howard (Fraggle) subsequently revealed that he had been given the DoomEd source 10 months prior and had been working on an OS X port of the code. The incomplete port was placed on GitHub.

Romero followed the DoomEd source release 30 minutes later by releasing the sources to the Doom, Ultimate Doom, and Doom II maps.[2] The levels were in the text-based DWD format used by DoomEd and required conversion to the normal WAD format in order to be played.

In addition to the canonical levels included in the released games, various other levels were included, including older development versions of some of the levels and incomplete or unfinished maps. The deathmatch level IDMAP01, which was eventually released as a PWAD, was also in the set.

A third release by Romero contained a large number of Doom's textures and graphics from Doom's development, many of which had been cut from the final game.[4]

Some of the images showed the original photo captures of the models via Fuzzy Pumper Palette Shop and used as the basis for Doom's sprites, along with scans of hand-drawn sketches (presumably drawn by Adrian Carmack) that were turned into in-game textures. Some of these images had been put on Twitter by Romero several months prior in celebration of Doom's 21st birthday (example).