The 20th Anniversary Doom Challenge was an event organized by id Software and Bethesda as part of the 2013 twentieth anniversary of Doom, and took place as part of the QuakeCon 2013 convention in Dallas, Texas. It was announced on June 5, 2013,[1] and was held at the Hilton Anatole between Thursday, August 1, 2013, and Saturday, August 3, 2013. Registration was on-site only, on August 1 at the convention center. Players were allowed to enter on a "first come, first served" basis.

Sixteen free-for-all matches were used to qualify 32 players for a single elimination tournament bracket. The following bracket matches were conducted in a best-of-three format. Each match was scheduled to last for 30 minutes. Some events were streamed on a limited basis on Twitch by production company FACEIt. Commentary was provided by Xavier "ZoOt" Dhorne and Alex "Jehar" Popa.

All game play was undertaken using the Odamex 0.6.3 source port. The following maps were part of the tournament map pool: 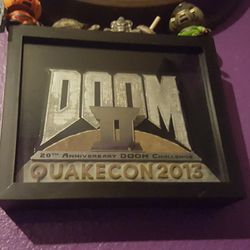 The final standings of the tournament were as follows: