The 32in24 Series is a continuous, experimental mapping project produced by the YEDS team, or "Yeoman Engineers and Designers of Software." The original 32in24 consisted of a 32 map deathmatch megawad created entirely in 24 hours, on June 16, 2007. 32in24 megawads are typically designed for online gamemodes, and see some play on deathmatch servers on both ZDaemon and Zandronum, but the most heavily used wad is 32in24 CTF, which sees regular play on CTF servers and in IDL competition.

32in24's original concept was introduced by Shaikoten, who sarcastically suggested on OFTC's #unidoom channel that the members of Unidoom should make a 32 map DM megawad in 24 hours. With the encouragement of deathz0r, a thread was posted on Doomworld to organize the project, and the goal of 32 maps was not only reached, but overshot within the deadline, with only 30 minutes of organization before it started.

While initially the purpose of 32in24 was simply to create fun, playable maps in a short period of time, the focus of the project eventually took on a dual mode; for one team to provide solid, playable layouts, and another to detail the layouts in a modern, aesthetically pleasing manner. The culmination of this speedy, assembly-line approach to map making is seen in the Cacoward-winning 32in24-5. 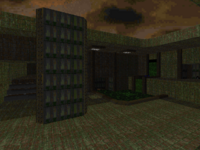 The initial wad in the series, simply featured 32 DM-FFA maps created in 24 hours. The project was compiled by deathz0r. It featured no graphics resources outside of the original doom2.wad, and did not feature many heavily detailed maps. 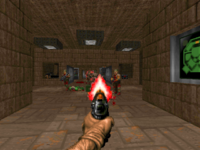 Often considered a failure, 32in24sp.wad was created on a Monday in the weeks following the initial 32in24. It was designed for a single player/coop game mode. Demand at the time was high for a sequel to the 32in24 project, but the execution of a project on a Monday led to decreased attendance by mappers, in addition to the increased complexity and difficulty of creating single-player maps. 32in24sp.wad featured 19 maps of varying quality, some of which border on the more experimental and avant-garde. 32in24-sp did not see participation from deathz0r, with Sarah Mancuso (esselfortium) compiling the wad instead. Esselfortium would soon take an increased leadership role within the production of 32in24. 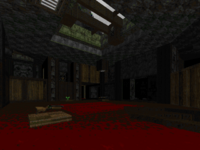 32in24-3 was a less ambitious project than 32in24sp, which focused on creating smaller maps for the duel gamemode. The project once again returned to its Sunday build date, in August of 2007. In contrast to 32in24sp, this project far exceeded expectations for map production, creating several excess maps over 32. According to the wad's textfile, the excess maps from 32in24 and 32in24-3 are slated to be released in an "overflow" wad sometime in the future. This wad was compiled by deathz0r and featured additional textures from Ultimate Doom. 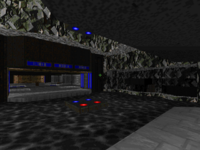 A CTF WAD with additional texture and flat resources compiled and created by esselfortium, 32in24-4 has enjoyed great success in the online community as a replacement for the often played zdctfmp series. The wad is designed to run on Skulltag, ZDaemon, and Odamex, utilizing the cross-compatible Boom CTF standard. It sees play during the IDL's regular season games as well as on public ZDaemon and Skulltag servers. It features 32 maps, with some excess presumably destined for the overflow WAD, and was compiled in a joint effort by esselfortium and deathz0r.

MAP13: Azathoth's Decayed Base of Boppin' by Matt Cibulas (RottKing), MAP17: Buntaluffigus by mid, and MAP31: Mountain Zero by Tango were used in the Winter 2008 season of the International Doom League. 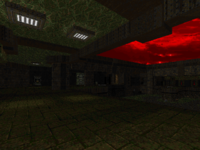 32in24-5.wad's approach was the brainchild of Shaikoten, who did not like detailing his maps, but imagined 32in24 could be producing higher quality work. He therefore suggested an "assembly line" process for detailing; that there would be specialized teams to create the layouts of maps, and others to detail them. Esselfortium compiled an extensive texture wad and convinced several mappers highly regarded for their detail work to join onto the project.

32in24-5 took nearly a week to complete, though the initial layout period was done within the 24 hours, and most of the detailing was done by the second day. The results, however, have sometimes been compared to WADs like Crucified Dreams and others, which took several months or years to develop. 32in24-5 won Doomworld's 2007 Cacoward for best DM WAD, beating out competitors Sabbat Martyr, OdaCTF, and UTNT Invasion.

Diet 32in24 is the second attempt at a single player 32in24, using the 32in24-5 approach to detailing. The name "diet" refers partly to the fact that the wad only contains 16 maps. The maps are also a spoof on advertising and commercialism, featuring Doom Community themed billboards for largely fake products. The production of Diet 32in24 took nearly a week and a half, and the compilation of the WAD was continually postponed for months on end. On September 30, 2008, Diet 32in24 was finally released. 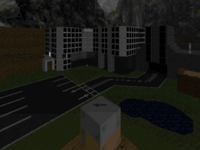 32in24-6 was the first 32in24 of 2008, created after a several month hiatus from YEDS team leaders after the more difficult 32in24-5, Diet 32in24, and Greenwar II. It featured rules nearly identical to the original 32in24 project, and received 46 submissions. All 46 maps are included in the WAD, one of which is a single-player map created by a confused Huy "Doom Marine" Pham.

Main article: 32in24-7: Return of the Night of Capture the Flag 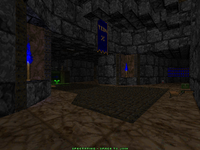 Following two of its more successful predecessors, Cacoward winning 32in24-5, as well as 32in24-4 which had maps featured in the International Doom League, 32in24-7 was a Capture the Flag type wad with focus on detail from a second (and in more than one case a third) mapper. The maps themselves were constructed in early April 2008, with the wad being released in late June with a total of 35 maps included.

The wad went on to be one of the most successful of the series, winning the Cacoward for best multiplayer WAD of 2008 and, like its CTF predecessor, having a select few maps used in of the International Doom League.

The eighth official volume (excluding Diet) of 32in24 is the latest installment constructed in the year 2008, being worked on over the course of December 31st. (A Wednesday, for the first time in 32in24 history.) This one's theme was single player to multiplayer. The original id maps from Ultimate Doom (all 4 episodes) and Doom II were to be made more suitable for deathmatch, not unlike many of the Dwango maps released back in the mid to late 1990s. Thirty-six maps were submitted, and thirty-three made it into the final WAD (including one submitted four days late), ultimately released the following week. Despite a breach of one of /idgames rules for submission, 32in24-8 found its way into the archives nonetheless.

The ninth WAD in the series was released on Christmas 2009. Like the third 32in24, the focus of 9 was to create maps suitable for 1-on-1 duels. A total of 45 maps were included in the WAD.

After a hiatus of nearly a year, the tenth 32in24 session was held to commemorate the approximate three-year-four-month anniversary of the series. The session began on October 24, 2010, and the WAD was released on October 31.

This session aimed to create a megawad of 4 to 8 player free-for-all maps for the third time in the series' history. The 32 map goal was not reached within the original deadline; later tactical analysis concluded that this was due to "a timely ambush by dastardly terrorists" combined with a lack of motivational artwork by chief Yeoman Engineer Shaikoten. The deadline was immediately extended by an additional day, by which time 37 total maps were completed. Two "3.5th anniversary bonus levels", originally created for previous 32in24 sessions but unreleased, were also included in the WAD.

One year after 32in24-10, the eleventh session was held, presumably because it had been a year since the previous session was held. This session took place on Sunday October 23, 2011. The wad entered beta on October 29, and was ultimately released on the fifth of November.

The goal of this session was a simple 4-8 player FFA wad, as is the standard for 32in24. However, there were a few key differences. Firstly, mappers were allowed usage of a more varied resource wad (Community Chest 4 texture pack) and cosmetic changes were allowed well into the beta stages. This was done due to the wad's "Special twist" in which the Odamex team decided to help with beta testing and quality control within the wad by using the beta as part of a weekly gaming session. In addition, rather than simply throwing the wad to the public shortly after the build, the layouts received input from members of the multiplayer community through every step of the testing process, so as to ensure the high caliber of maps that had been lacking in more recent 32in24 entries. This effort appeared to have paid off, as the final release, containing 45 maps made in 24 hours, was received with much praise by the community.

After another year, the twelfth session started on Sunday the 12th of August 2012, with a detailing pass held on August 19th. The final release happened on the 28th.

The "secret ingredient" for this session was Capture The Flag, aiming at creating CTF maps compatible with Odamex, Zandronum and ZDaemon. In total, 37 maps were created.

Main article: 32in24-13: A Thanksgiving Without Burgers

In honor of Thanksgiving 2013, a celebration, feast, and mapping session was called. However, the burgers that were supposed to be served in the gathering were lost in an incident that included hot sauce. Nevertheless, on December 1, 2013, the 4-8 player deathmatch-centered mapping session commenced and, to honor the lost burgers (and the late Dimmy Waywes), the maps were all food-related entries. They were mostly named according to various dishes, but battles fought on giant pizzas, in oceans of gravy, and in the confines of a pastry filled diner also affected the naming of the 47 maps. Over the next week, slight gameplay tweaks and detailing following criticism and playtesting was implemented before the map package was officially released on Doom's 20th Anniversary, December 10, 2013.

Main article: 32in24-14: How the Hamburglar Stole Christmas

Continuing the theme of food items and annual excuses to eat them, the 14th installment provided a return to single-player maps. As a twist, participants were allowed to reuse architecture from any multiplayer map from the 32in24 series, to hopefully speed up mapmaking as single-player maps were deemed to take longer to finish and polish than DM or CTF maps.

The 15th installment, run in December 2015, returned to free-for-all levels for 4-8 players, with cinema as a dominant theme. For this, every level needed to have a movie title pun as its name, and the project revisited the billboard concept from Diet 32in24 with fictional movie posters scattered throughout. The levels were created in one day, and then detailed and fixed up throughout the following week with the movie posters created at the same time. This session saw a record one-day turnout with 53 levels (plus an attempted post-deadline update to an existing map caught by the compiler), and then almost a month of periodic beta updates before its release in January 2016. This period was based entirely on waiting for Shaikoten to draw an intermission picture. When this did not happen, 32in24-15 was released with a quick edit of Abyssal Speedmapping Sessions 21's intermission picture, originally created for the same reason. It is also the first 32in24 to be split into multiple wads, with one file for the main megawad and a "Bonus" file with extra levels that must be loaded together with the other. Doing this turns the megawad into the "Uncut Edition" and allows the complete set to be played.