5till L1 Complex is single-level PWAD designed by Lainos for Doom II. It was released in 2012 and requires a limit removing source port. The mod uses a music track and intermission music from the anime series Angel Beats! while replacing the title music with silence.

5till L1 Complex was awarded one of the 19th Annual Cacowards. 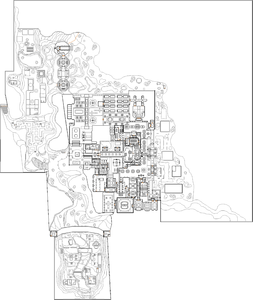 Map of 5till L1 Complex
Letters in italics refer to marked spots on the map. Sector, thing, and linedef numbers in boldface are secrets which count toward the end-of-level tally.

An imp (Thing 8602) in the northwest has no flags set for any of the three difficulty classes, so it does not actually appear in the level. It is at the same spot a demon on skills 1-3, so probably was intended to appear on skills 4-5.

* The vertex count without the effect of node building is 27252.