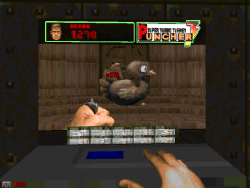 A shot of the ACS minigame ZSuper Turbo Turkey Puncher 3.

An ACS Mini Game is game made with ACS for playing with in a Doom port (often ZDoom). A craze was started by Andrew Stine (Linguica) and "Doom Racer" mini-game inside Action Doom, which was an ACS version of Rad Racer.

Games that have been made[edit]