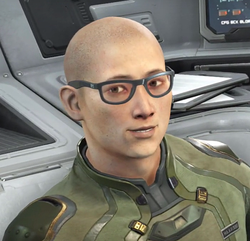 The ARC Intern while assisting the Slayer

Not much is known about the Intern, other than the fact that he is very fond of the Doom Slayer and has a slight case of fanboyism.

As the Slayer arrives at the top of the ARC Complex, the Intern is the first one to greet him, guiding him to the demonic Crucible, and informing the Slayer that Samuel Hayden was convinced he would come to the Complex for it.

The Intern leads the Doom Slayer into the next room, where other ARC employees can be seen scrambling to evacuate. Samuel's damaged body is hooked up to machinery and the Intern tells the Slayer that none of the ARC employees could access Samuel's main cortex due to its alien nature, and that they need to prepare for Hayden's careful extraction. It is safe to assume that once the Slayer takes possession of Samuel and the Marauder arrives that he leaves the ARC Complex.

The Intern shows up once again on the ARC Carrier, informing his supervisor that they will be able to teleport the Slayer onto the UAC Atlantica to retrieve the Seraphim. He also opens the portal for the Slayer to that location.

Once the Slayer returns from the swamps with the Dark Lord's life sphere, all other ARC employees evacuate whilst the Intern remains; he correctly guesses that the Slayer intends to restore the Dark Lord to physical form so he can be destroyed. He informs the Slayer that he will be able to enter Urdak as long as he has a life sphere, then sets the portal to the Equestrian Holt and bids farewell to the Slayer, referring to him as "Doomguy" before apologizing under his breath, though the Slayer gives no visible reaction.

The Intern returns in Part Two, although with a smaller role. He does not physically appear, but he guides the Slayer via radio messages and HUD updates. The Intern is last heard near the entrance to the Dark Lord's tower in Immora, where he loses contact due to unknown interference.

He also has a brief meta cameo at the end of the credits, where he delivers the id Software team's thanks to the player for playing their game.