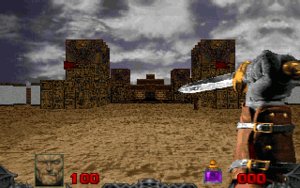 The opening level of ATTE3.

ATTE3, also known as Atte 3, is a fan made game by Aleksander Trojanowski, that heavily features assets from Hexen, Doom and other games such as Witchaven with original level design and a custom engine, based on QuickBASIC.

ATTE3 was the last game in the ATTE series to be made and remained unfinished. Spanning four levels, the game is relatively short and is more rooted in fantasy rather than science-fiction. Similarly to other games from the author, various assets are ripped and used, this time primarily from Hexen and Witchaven. Assets used are enemies, sprites, weapons and textures.

Aleksander Trojanowski left the project in an unfinished state because he was fed up with programming in QuickBASIC. The source code of the game was included, along with a level editor for others to use. Trojanowski mentioned working on a fourth entry in the ATTE series, but this was never to occur. As such, the last version of ATTE3 remained in alpha, dated January 2002.

The last and final engine in the series, the ATTE3 engine is a true 3D polygonal engine that has data references from Aleksander's first game, IDKFA (video game). It makes use of several libraries in assembly language, namely DirectQB and Dash, which are used as modules in QuickBASIC to provide a 320x200 VGA screen with 256 colors. They are also used to help speed up rendering as well as providing sound functionality.

Because of its underlying QuickBASIC codebase and inclusion of several routines in assembly, the game carries a significant performance deficit requiring a rather fast computer to function properly in DOS, far beyond what usual titles on this platform require. The following requirements are taken from the ATTE3 readme:

However, because of its reliance on 32bit libraries and requiring VDMSound to enable music as well as the additional advanced graphical features from the engine mean that the game is difficult to run on emulators like DOSBox. For optimal experience, a genuine DOS computer is required.

The ATTE3 engine source code is provided with the released binary and may be used in other titles. A level editor is also provided so that those interested can make new levels for the game.