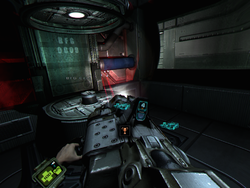 The AVD is visible at lower left.

The AVD is a wrist-worn smart device in Doom 3: VR Edition. It displays the wearer's health, armor, stamina, and flashlight charge. It was added to the virtual reality version of Doom 3 in order to replace the HUD, a concept that does not work well in virtual reality games. It is large, is olive green, and is worn on the marine's left wrist. The game does not add any in-universe explanations or tutorials for the AVD as it is mostly intuitive.

The concept of the AVD is very similar to the Pip-Boy devices (Personal Information Processor) of the Fallout series, which are also mounted on the left wrist and display player statistics on a monochrome black-and-green screen.