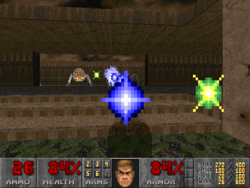 Despite the fact that they are not considered "bosses", A_BossDeath is also invoked as part of the Mancubus death animation. This triggers the walls to lower in MAP07 when all mancubi have been killed, revealing the arachnotrons shown here.

A_BossDeath is a code pointer used in the death animation for the Arachnotron, Cyberdemon, Spiderdemon, Mancubus, and Baron of Hell.

The A_BossDeath code pointer appears in the following states in Doom's state table:

The following is an example of how to set the A_BossDeath code pointer in a Dehacked file: