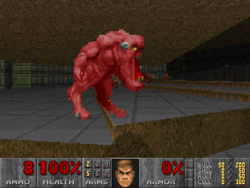 Demon biting in the wrong direction because of the Partial invisibility artifact.

A_FaceTarget is a code pointer used in the melee attack and attack animations for various monsters.

True to its name, A_FaceTarget changes the angle of the monster it is called on to be facing in the direction of its target; if it has no target, it does nothing. This is important for attack animations so that the monster appears to observers be attacking the right thing, but for hitscanners it also sets the direction in which the monster shoots. This is not the case for projectile launchers where the aiming calculation is done separately.

If the target has invisibility (an example is due to the Partial invisibility, but also if the target is an invisible monster like the Spectre), a random offset is added to the angle so that the monster appears to be attacking the wrong location. This has different effects depending on the monster:

The A_FaceTarget code pointer appears in the following states in Doom's state table:

The following is an example of how to set the A_FaceTarget code pointer in a Dehacked file: