A Hidden Mountain Factory is a single-level PWAD for Doom II created by Grzegorz Werner in 1996. It was named by Doomworld as one of the ten best mods of 1996. As suggested by the name, the level takes place in a small factory, hidden inside some dark mountainous caves. 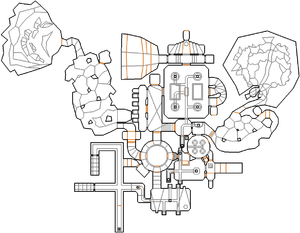 Map of A Hidden Mountain Factory
Letters in italics refer to marked spots on the map. Sector, thing, and linedef numbers in boldface are secrets which count toward the end-of-level tally.

Set in a mountain and an industrial structure, this map offers a good variety of paths in an understandable structure that should not take you long. You start in the outskirts, immediately in combat against some imps and chaingunners. Follow the path until you enter the dark cave, then turn left and go down carefully to avoid being killed by the former sergeants. Keep walking and you will reach an elevator which takes you down into a small, cramped canyon, full of enemies. Once you eliminate them, keep going. Ahead, you will find a door which welcomes you to the factory.

The first room will have a few enemies. On your left side, there is a small window overlooking an industrial complex and, on the other side, chaingunners will attack you. In front of you there is another door, when you open it, a pair of Hell knights will welcome you. The next room will be guarded by former sergeants and a mancubus. Go ahead, go down the stairs and you will be in the first open area of the map. On the south side you will find a blue door. Go to the end of the corridor and open the door on the right side, where you will find the super shotgun and several enemies. When you enter the area, you will see two doors, one on the north side and a door on the east side. Take the one on the north side. As soon as you open it, several demons will attack you and teleport behind you.

The next room contains the blue key. There are two exactly equal paths to take. Be careful when you reach the blue key, as an archvile will immediately jump out at your assault. At the back of the small room where the archvile came out of, you will find a switch which opens the door you entered through. Go back and go to the blue door, in the previous area. Now, there will be a lot of enemies guarding the blue door. Once you eliminate them, continue on your way.

The next area is a tight path that goes up through movable stairs, rising in the shape of a spiral tower. The path will be full of former humans so pay attention. Once you get there, you'll notice that it's some kind of giant container, but you don't need to jump inside. Pick up the radiation suit and walk carefully over the ledges, you will see a window where chaingunners will attack you. Enter the window and go down the elevator.

Now you are in sewers. Take the left side and then turn back to the left side. You will enter a tight passage that ends in a door. On the other side is the red key, but it is being guarded by several Hell knights. Once you pick it up, go back and you will see some steps on the south side. Open the door and you will enter the giant container, but now, take the right side and press the switch, the red door lies there.

Inside you will see a door in front of you and an elevator on your right side. Take the elevator. Enemies will ambush you here. This room contains the yellow key, pick it up and return by the elevator. Now, go through the door and you will enter the previous room containing pillars moving up and down. Go ahead and you will see a switch, press it and another door will open which contains another switch. When you press it, the pillars will have stopped. Return to the nukage container.

Several imps and former sergeants will be waiting for you, so be ready for combat. In front of the red door is another switch, which reveals the way to the yellow door. Cross it. The path has a small trap where a platform will lower you down and you will be attacked by chaingunners, but it's nothing complicated, just wait for the platform to go up again and continue. Now you will be in a new cavern, quite dark and full of enemies.

The path is only one way, so just keep walking, go up through the cavern and you will be close to the exit. You will encounter a baron of Hell and a few chaingunners. Once you eliminate them, you can keep walking and you will cross the exit line, ending the map.

* The vertex count without the effect of node building is 1913.