A World in Strife: Raiding the Dam

A World in Strife: Raiding the Dam is a single-level PWAD for Strife using the ZDoom source port that was finished in March 2010. It was designed by Adam Woodmansey (Khorus) and uses his own custom music track. 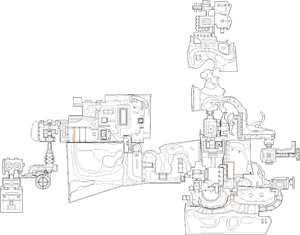 Map of A World in Strife: Raiding the Dam
Letters in italics refer to marked spots on the map. Sector, thing, and linedef numbers in boldface are secrets which count toward the end-of-level tally.

Head straight forward on to a ledge, which will set off the alarm and alert enemies to your presence. Destroy the wooden barrels and collect the crossbow, two med patches and three pieces of gold. Step back into the water and head north between two pillars to a door, collecting another med patch on the way. Once through the door, turn right and right again to pass through another door.

Head down the corridor past the staircase and take the assault rifle, med patch and two bullet clips near the door. From here you have a choice of paths - go through the door to seek the gold key, or head up the staircase to look for the silver key. They can be done in either order, but both are required to enter the west half of the map.

After collecting the assault gun, go through the door to an outdoor area with acolytes. Press the switch in the north-west corner to open the gate next to it, then go through the gate and up the staircase behind it. Go through the door on the right to find a shopkeeper selling medical supplies, then go north through the larger door to enter an area with a fountain. At the fountain, head east down a set of steps and destroy the wooden barrels here to find a mini-missile launcher. There is also a merchant in a nearby passage who sells bullets and an ammo satchel if you have the funds.

Look at the pipes on your left and turn the valve on the center pillar, which will open a door at the south end of the area and reveal a crusader and templar on the Training and Rookie skill levels, or an inquisitor on Veteran or higher. Once the enemies are out of the way, enter the alcove they came from to find the gold key. Throw the switch here to open the bars blocking the way out.

Go up the staircase and follow the path running alongside a river. Halfway along you will see a ledge holding leather armor, a box of bullets and a medical kit - taking the items will alert several sentinels hiding near the ceiling. Continue along the path and go through the door to an outdoor area, then cross the ledge and open the door at the opposite end.

In the next corridor you will face four sentinels on the Training and Rookie skill levels, or a crusader on Veteran or higher. Head down the stairs and collect all the items in this room which include a mini-missile launcher, watching out for the stalkers which drop in from a ledge. Head north to get outside and follow the walkway until you reach a lift, from which you can drop into the water. Head east through the water into a dark tunnel.

Follow the tunnel, dispatching any enemies that get in the way, until you reach a step guarded by two reavers. Head down the passage here to reach a room containing numerous enemies including crusaders and sentinels, watching out for the shadow acolyte that appears from an alcove behind you. Climb up the staircase and follow the walkway to a switch, which opens a door to the south. Go through this door to a lift and ride it up, collecting the ammo satchel sitting on the lift as well. Follow the passage here to get on top of the titular dam.

Head along the dam and turn right when the path splits in two. Go through the door ahead, turn right and take the lift down to a water area with two drains. The first drain contains three medical kits, a box of bullets and a crate of missiles, while the second drain contains ten gold and the silver key. Collecting the key will cause several stalkers to teleport in - destroy or avoid them as you see fit.

Once you have the gold and silver keys, you need to backtrack to the first room you entered from the start point. Once you return to that room, head west through the door requiring the silver key. Follow the path around the fenced area with crates and open the door to the left (requiring the gold key). Go through this door and throw the switch behind it, which will lower a barrier to the west and cause some acolytes to teleport in next to it. Head back through the gold key door and go west under a brick structure. Follow the path round until you reach a switch, which will lower the lift you are standing on to take you down to a lower floor. Keep following the path around the water pool, destroy the crusader in front of you and open the door it was guarding.

Step into the teleporter on your left to get to a previously unreachable flamethrower; taking it will open a wall to the north, revealing another teleporter back to the path you were on previously. Head north through another door to an area with several buildings; as you enter this area, note the gray brick building straight ahead of you which requires the brass key to open it. Look just to the right, and you will see a red wood building; on Training and Rookie skill levels, the mauler can be found in front of this building. There are also merchants to the east who can sell you different supplies.

Head north-west and cross a bridge, then head south and west past several reavers until you reach a door requiring an ID badge. Turn left and left again to see a wide area with overhanging banners, ending with a number of bars blocking a small grassy area. Go down the hall and an inquisitor will rise from below the ground in front of you. Defeat it and then go through the bars (which lowered during the fight) and take the brass key from a stone plinth.

With the brass key, backtrack along the path until you reach the previously-mentioned building that requires it. Go through the door, take the mauler sitting on the bed (on Veteran skill level or higher) and then pick up the blue ID badge sitting on a low shelf.

Head back round to the door that required the ID badge to open and go through it to an area with distinctly alien architecture. Follow the path through a pair of sliding doors and go down a staircase. Ignore the door in front of you for now and turn right, going down a set of steps to a T-junction. Turn left and go through a small door, then cross the poisonous water to find a switch which you should flip.

Backtrack to the door you ignored earlier and go through it now, reaching a room that has a round staircase and four gray platforms (which lowered when you pressed the earlier switch). Head down the staircase, defeat the four crusaders at the bottom of the room and take the mauler key sitting on one of the platforms.

Go back up the staircase and return to the T-junction. Go right this time and open the door ahead which requires the mauler key. Follow the path to a large area, where a switch is guarded by two templars on the Training or Rookie skill levels, or an inquisitor on Veteran or higher. Once they are destroyed, flip the switch to lower the wall behind it, leading to a balcony facing an outdoor area.

Once the Programmer is dead, the level automatically ends. You will be sent to MAP30, which is just an inescapable room with THE END written on the floor and a neighboring pit full of peasants.

On the route to the gold key, you pass through a room with a rectangular fountain before reaching an outdoor area. From here, head east down a dark water-filled tunnel to an area with an upper walkway. When you reach the end of the river, take the mini-missile launcher and other supplies if needed and climb up the stairs. Go forward between two pillars and open the door at the bottom of the steps to find a room with several acolytes and stalkers. Go east from here down a hallway and open the door at the end. This leads to a dead-end with a grenade launcher.

* The vertex count without the effect of node building is 11946.

The large wall in the Programmer's chamber is controlled by two voodoo dolls. On Veteran skill level or lower, pressing the final switch releases a voodoo doll that triggers a walkover line to lower the wall. On Elite or Bloodbath, a second voodoo doll is released as soon as the level starts and lowers the same wall long before the player reaches it (on lower skill levels, this voodoo doll is blocked by anvil decorations), hence why that wall appears to be missing on the highest skill levels.

A voodoo doll is also used to open the bars blocking the exit from the gold key area.