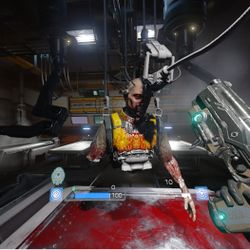 Dr. Peters observes his physical remains after his cybernetic transference.

Dr. Abraham Peters was a UAC scientist who worked at the UAC Mars Base during the events of Doom (2016), and is the protagonist of Doom VFR. He was the last ordinary survivor of the invasion when the elevator he was inside seemed to protect him from Olivia Pierce's Hell wave like a Faraday cage. Unfortunately, the elevator doors opened shortly thereafter, allowing a pinky to kill him. A top secret UAC cognitive transfer protocol was automatically activated, however, causing Peters' consciousness to be digitized and uploaded to the UAC's computer systems.

Dr. Peters awakens within a portion of the Advanced Research Complex to see his own corpse suspended in front of him and realizes that he has died, biologically speaking, but now exists as a virtual agent - a transformation which he states has not been undertaken since Samuel Hayden was transferred into his cyborg body. After noticing that a Hell portal has been opened at the Argent Transfer Station, he sets about learning how to use the combat chassis and goes on a quest to restore various base resources in order to shut down the portal. As part of this process, Dr. Peters even has to hunt down a lost prototype cyberdemon in Hell in order to obtain its Argent accumulator.

After obtaining the accumulator, Dr. Peters uses it to destabilize the Hell portal and manages to shut it down. However, as soon as he accomplishes his goal, Samuel Hayden interrupts the protocol sustaining Peters' activities. Stating that Dr. Peters has "caused many problems," and then bidding him goodbye, Dr. Hayden executes an Omega Subroutine that ultimately terminates the man's consciousness.