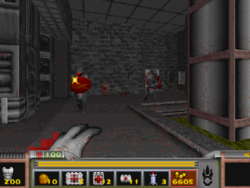 Acolytes are enemies from the game Strife. They are soldiers of The Order. They are dressed in full body armor, varying in color, which covers a mostly cybernetic body. Acolytes are armed with assault rifles, and most of them drop a bullet clip when killed. They usually attack only if the alarm is active, and the player can even talk to them while they are on stand-by, although most acolytes are temperamental and will rudely brush the player off.

Some acolytes are dressed in shadow armor and are called shadow acolytes. They are translucent, but other than this are no different from ordinary acolytes. All acolytes have 70 hit points (the same as a heavy weapon dude).

According to Macil the main platoon of acolytes are controlled by a single program, created by the Programmer. This is why the player must eventually face him in the first part of the game. Acolytes are created by a machine known as the "Convertor". It is found inside the Factory near the commons.

Acolytes are somewhat unique in that they will react to seeing nearby comrades killed by the punch dagger by attacking the player, even if the alarm is not active. The acolytes must be in the same sector for this to happen. Templars also react in this fashion.

In the IWAD acolytes exist in eight colors, but in many maps they have roles as minor characters with specific names, which are used in the things tables on the pertaining map pages. Below are the raw statistics of the unnamed enemies.

Acolytes are first encountered on these maps per skill level:

The IWAD contains the following numbers of acolytes per skill level:

The shadow and becoming acolytes are first encountered on these maps per skill level:

The IWAD contains the following numbers of shadow and becoming acolytes: