Action Doom is a total conversion that attempts to simulate 2D sidescroller shoot-em-up gameplay in Doom's first person perspective. The project was spearheaded by Stephen Browning (Scuba Steve) with additional help from Mike Watson (Cyb), Julian Aubourg, and Kara Rader (Nanami). The author of Action Doom dedicated a significant portion of time to creating blogged "advertisements" and held contests for various events to give away prizes that related to Action Doom.

The purpose of Action Doom was to not only create a modification for Doom, but to invent and market an imaginary product with the intent of simulating the environment surrounding the golden era of gaming of the early 90s. Coupled with the hopes of invigorating the stagnant Doom community, the author tried to generate as much hype and interest while showing almost no preliminary screenshots or information, leaving those items up to the community's imagination. 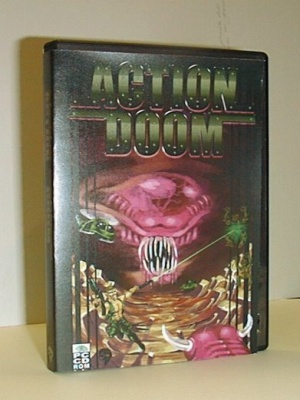 The physical box made for Action Doom
From late October 2003 until its release on July 3, 2004 the author ran a series of advertisements on his blog on Doomworld. All the ads are chronicled here on the Action Doom webpage. In addition to countless silly "ads", the author also went as far as to make three t-shirts which had the Action Doom logo, and even more extreme lengths to create a DVD case with a fully assembled instruction manual, high gloss cover and printed CD. The 10 boxes were given out in various contests the author held through Doomworld's forums.

The first contest encouraged people to submit their own advertisement and say how much they loved Action Doom. James McChesney (DooM Anomaly) was the winner of the t-shirt, and the results of that can be found here.

The second contest was a High score contest with three places.

A third unofficial contest was held on the website. The first two people to complete a fake pre-order form received a box. Owen Lloyd (Sarge Baldy) and again, James McChesney (DooM Anomaly) were the two recipients of boxes.

The remaining 6 boxes were awarded to members who contributed to or others. 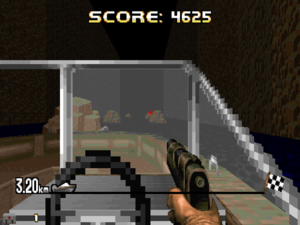 Action Doom boat ride
Action Doom began life in 2001 as a simple weapons mod that fired projectiles instead of bullets, and went by the name Metal Slug Doom. Not until the summer of 2003 would anything become of the project or would it evolve any levels.

Action Doom featured several first and never before seen Doom tricks using the ZDoom engine. In the second level, the player is confronted with three separate paths to take. One path led on a high speed boat chase which allowed the player to manually control the boat and navigate a river dodging rocks. The third level featured what was to later become the first of a series of ACS mini games: Andrew Stine (Linguica) was responsible for the Doom Racer arcade machine, which was a parody of Rad Racer.

In terms of length, Action Doom has four levels, with an optional fifth level if played on the "Contra" setting. The WAD's gameplay and shelf life are expanded by the inclusion of five separate paths to take each with their own unique theme; however, none of them have any impact on the ending. Action Doom also features six new songs all created by Julian Aubourg.

In the end, Action Doom was an interesting experiment in WAD making. It had little to no impact on what was expected from projects, its biggest accomplishment was pulling the player away from the confines of just a third party video game addon, but to actually interact with the player outside of an impersonal Internet community.