Action Doom 2: Urban Brawl is a 2008 computer game which runs on the ZDoom engine. It was mainly developed by Stephen Browning, with ACS scripting by Mike Watson and James Bauer. It is the prequel to the total conversion Action Doom, but has a different style of gameplay. Whereas the first Action Doom was inspired by sidescrolling shoot 'em up games, Action Doom 2 instead simulates a beat 'em up, heavily influenced by games such as Streets of Rage and Final Fight but in a first person perspective, with a unique cel-shaded visual style and a heavy emphasis on storytelling.

Action Doom 2: Urban Brawl was followed up by an expansion pack called Urban Brawl: Dead of Winter in 2013, once again developed by Stephen Browning with help from help from Nash, Lil' White Mouse, Xaser, Graf Zahl, and Esselfortium. On December 10, 2008, Action Doom 2 was one of the winners of the 15th Annual Cacowards that year, with the expansion pack similarly receiving another Cacoward in 2014.

An updated version of the total conversion for GZDoom was released in 2021 under the name of Action Doom 2: Urban Brawl Reloaded, which contains both the original game and the expansion pack plus numerous enhancements. 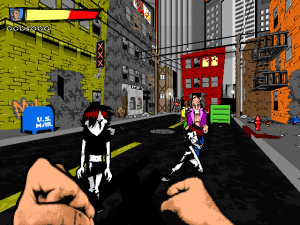 As mentioned, Action Doom 2: Urban Brawl is largely based off classic beat 'em up games, and incorporates many gameplay features from them. Because of this, the gameplay is largely oriented around close quarters combat, as most of your attacks and weapons, as well as your enemies', are melee-only. There are however several ranged weapons that the player may acquire as well. Much like its predecessor, Action Doom 2 features branching paths the player may take throughout the levels, although this time, it also features multiple endings depending on the player's choice during the game. 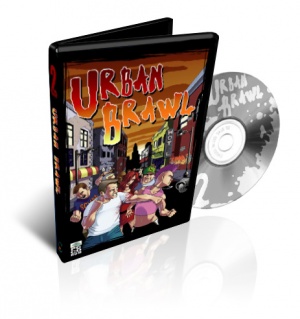 Action Doom 2 was available in two forms: A free download, and a CD that could be purchased from the official website for USD$9.99 through PayPal. The CD version came with its own case and box art, as well as several exclusive bonus levels including a survival zombie war set in an urban environment. The sale of the CD version has been discontinued as of May 20th, 2010. As a result, the bonus levels have been released for free on the Action Doom 2 website.

A remastered version of the game was released on August 10, 2021 for GZDoom and Zandronum, it features improved combat mechanics and multiplayer co-op, survival and deathmatch support by sluggard, numerous bugfixes and various other enhancements such as ultra-widescreen compatible cutscenes and visually retouched maps.