Administration: Union Aerospace Corporate Division is the fourth level of Doom 3. The pinky demon is introduced at a cutscene. The growth taking over the base is first seen, and this is where monsters start teleporting in. The player has the first opportunity to receive a chain gun, locked inside a Martian Buddy storage cabinet. Grenades are also first available here. The player must find William Banks' PDA to continue on to Alpha Labs. 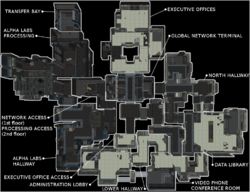 The level begins with the marine arriving at the Administration Complex. As he steps out of the elevator, a cut scene takes over and shows Counselor Swann arguing with Dr. Betruger over a video comm link. Swann states that the situation is out of control and the UAC is assuming control. Betruger is completely unfazed by the chaos surrounding him, and tells Swann that he will handle this matter on his own. He then cuts off the transmission. Jack Campbell opens up his weapons case containing the BFG and prepares to execute "plan B."

The marine fights his way from the lobby to the Alpha Labs entrance. However, the doors are locked and he must find director William Banks's PDA. He also encounters a dying marine E. Webb, who tells the marine he was ambushed and that there may still be other marine teams out there. Whether spoken with repeatedly or left alone, Webb eventually dies. After opening the Executive Office doors from the Data Library, the marine is confronted by a new enemy, the pinky demon. In addition, Sergeant Kelly contacts the marine over the radio and informs him that there is some kind of unidentified growth taking over parts of the base. This growth is later seen in Malcolm Betruger's office. The demons also demonstrate their ability to teleport here.

After acquiring Banks's PDA from Betruger's office, the marine fights his way back to the Alpha Labs doors and gains access to Alpha Labs Sector 1.

The enemy count on Nightmare is the same as on Veteran. There are no changes in the enemy amount in the BFG Edition.