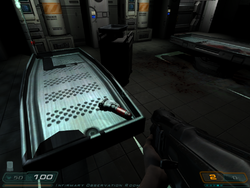 The adrenaline can be found in the infirmary of the Mars City UAC Corporate Division.

The adrenaline powerup in Doom 3 resembles a large hypodermic needle. Once taken, it is immediately used, and the sound of an accelerated heartbeat is heard. For the next 60 seconds, the player will have infinite stamina, allowing him to sprint continuously.

Whenever the player is in Hell (this includes the Hell level and the final fight with the cyberdemon), they will be able to sprint for an indefinitely long period without exhausting. This effect (dubbed the "Hercules complex" by UAC scientists) is caused by Hell itself, and is visually indicated by flames shooting across the stamina gauge on the player's HUD (note that this visual indicator was removed from Doom 3: BFG Edition, but that the mechanic still works as intended despite this).

* The BFG Edition adds one more adrenaline pickup to this level, making the total count of 18 in this version.

The adrenaline powerups don't appear in Resurrection of Evil.

Adrenaline can be found in Exis Labs.