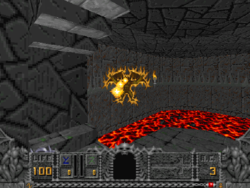 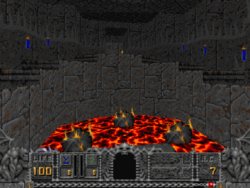 Afrits in their invulnerable 'ball' form.

The afrit is an enemy in Hexen. It is somewhat similar in appearance and role to Heretic's fire gargoyle, but its skin is nearly black, and it is wreathed in an aura of flames. Afrits have the fewest hit points of all Hexen creatures save the morphed pigs, requiring only 80 damage to take down. According to the manual:

"These larger, nastier cousins of the gargoyles found in Heretic are more than happy to douse you in flames. The only nice thing about them is the satisfying splat they make when you shoot 'em from the sky."
― Hexen instruction manual

Though the afrit generally flies at a leisurely pace, it can also make sudden quick movements sideways, and even backwards; they also have a tendency to strafe when firing. This makes them harder to hit. When attacking, the afrit will launch three small fireballs in rapid succession. These fireballs do not cause much damage, even to a player using the Mage class.

When first spawned on a map, afrits will be sleeping, curled into a tight rock-like ball. They are invulnerable when they are in this form, so it is wise to wait until they begin to uncurl before attempting to get a first strike in.

In the IWADs the afrit is first encountered on these maps per skill level:

The IWADs contain the following numbers of afrits per skill level: