After the Holocaust is a single-level PWAD created by Marcos Abenante (Sergeant Mark IV). It is a remake of MAP13: Downtown from Doom II, and uses the music track "Retribution Dawns," originally composed by Aubrey Hodges for PlayStation Doom. The map was later dubbed "Dead Streets" in Extermination Day, where it is overhauled to fit more with its realistic and "militaristic" theme. 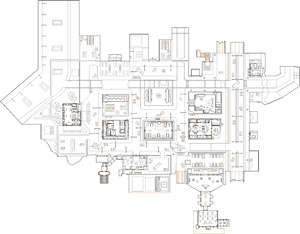 Map of After the Holocaust
Letters in italics refer to marked spots on the map. Sector, thing, and linedef numbers in boldface are secrets which count toward the end-of-level tally.

* The vertex count without the effect of node building is 12854.

Beta testing seemed to show that, unusually, OpenGL gave a better frame rate than software rendering. Sloping floors were nonetheless avoided for the benefit of users playing in software mode.