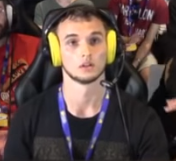 Aleksey Kamenev, also known as 4shockblast, is a Ukrainian-American speedrunner and mapper. As of January 2022, he is the most prolific speedrunner on the Doom Speed Demo Archive with over 2730 demos, most of which are in the UV max, UV speed and UV pacifist categories. He also currently holds several Compet-n records. Among his most notable achievements is his 2017 pacifist demo of E2M8: Tower of Babel, the first ever recording of the level being done in that category, as well as during 2019 being the first player to complete a UV speed/UV pacifist run of E1M1: Hangar in 8 seconds, over 20 years after its longstanding record of 9 seconds that was once thought to be unbeatable was set.

The following data was last verified in its entirety on November 22, 2020.

Compet-n maintains two separate competitions for levels that have an exit to a secret level. The styles with such a differentiation are UV speed, NM speed and UV pacifist.

n = The level is finished via the normal exit.

Aleksey holds two additional map records: one for Alien Vendetta and one for Hell Revealed.