Alfonzo Tries to Prevent Donald Trump from Starting Third Impact is a single-level PWAD for Doom II using a Boom-compatible source port. It was designed by Brayden Hart (AD_79) and uses his music track "Sanctuary", as well as "Impact" on the title screen. It was placed second in the 10 Years of Doom mapping contest. 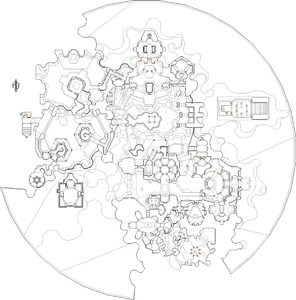 Map of Alfonzo Tries to Prevent Donald Trump from Starting Third Impact
Letters in italics refer to marked spots on the map. Sector, thing, and linedef numbers in boldface are secrets which count toward the end-of-level tally.

* The vertex count without the effect of node building is 9949.