Alfonzo Writes, Directs and Stars in His Own Television Show in the 1980s

Alfonzo Writes, Directs and Stars in His Own Television Show in the 1980s (a.k.a. Saint Alfonzo's Darkbase) is a single-level PK3 for Doom II and the GZDoom source port. It was designed by James Paddock (Jimmy) and uses a selection of music tracks by Jimmy and Alfonzo. It was placed third in the 10 Years of Doom mapping contest. 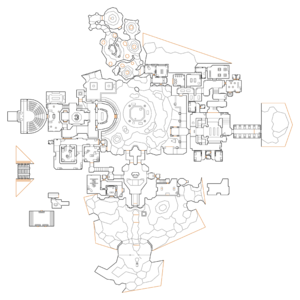 Map of Alfonzo Writes, Directs and Stars in His Own Television Show in the 1980s
Letters in italics refer to marked spots on the map. Sector, thing, and linedef numbers in boldface are secrets which count toward the end-of-level tally.

The entire map is a parody/tribute to Garth Marenghi's Darkplace, a 2004 British TV comedy that lampoons low-budget 1980s TV drama, horror, sci-fi, and egotistical "visionary" authors. Many of the plot-points are based directly on the first three episodes of Darkplace, and several of the music tracks are MIDI covers of portions of Andrew Hewitt's score for the series.