All Aboard the Mega Magilla Gorilla Flotilla

All Aboard the Mega Magilla Gorilla Flotilla is a single-level PWAD for Doom II that was created by Xaser Acheron in 2014 and last updated in 2017. It uses the music track "Message for the Archvile". 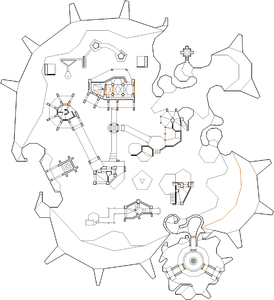 Map of All Aboard the Mega Magilla Gorilla Flotilla
Letters in italics refer to marked spots on the map. Sector numbers in boldface are secrets which count toward the end-of-level tally.

* The vertex count without the effect of node building is 1558.