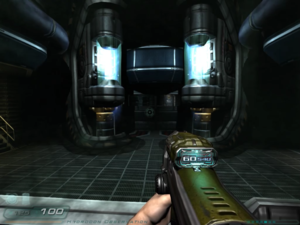 The hydrocon is one of the advanced technologies developed in the Alpha Labs.

In Doom 3, the Alpha Labs represent the first above-ground research facility established on Mars by the UAC. With an initial designation of "Phase 1," the construction of the facility began on October 29, 2095, and was completed on July 17, 2130, with the facility fully operational at that time. Until construction of the more advanced Phobos Labs, Delta Labs, and the never-completed Exis Labs, the Alpha Labs were assigned the mission of "premiere research facility." At the time of the destruction of the facility in 2145, it housed a mature chain of significant research projects focused around maintenance of the air, water, and hydrogen fuel supplies of the Mars base, with eventual aims at extension of the technologies into terraforming.

The three primary devices involved in this supply chain are the Elemental Phase Deconstructor, the Hydrocon, and the Molecular Fuel Storage Compactor. The Alpha Labs have two known entrances and exits, to and from the Administration and EnPro Plant facilities.

Sector 1 contains the main entrance of the Alpha Labs from the Administration complex. Sector 1 houses the Elemental Phase Deconstructor (EPD) and Hydrocon systems.

Sector 2 is one of the main sectors in Alpha Labs, and houses the Molecular Fuel Storage Compactor (MFS). The hydrogen fuel created by the EPD and isolated by the Hydrocon in sector 1 is compressed within containment cylinders in the MFS Compactor, and is then transported to sector 4 to be automatically packaged and distributed to other parts of the base for use in both on- and off-world applications.

Sector 3 is dedicated to control and maintenance of the MFS Compactor in sector 2. Waste material from the EPD is also processed here and sent to the Recycling Plant for post-refinement and disposal.

Sector 4 contains extensive automated equipment for distribution of the products of the EPD and Hydrocon systems, and particularly the sealing and distribution of hydrogen fuel. Sector 4 houses the EFR Systems which control and power the Alpha Labs. The system is fully automatic and personnel access is limited due to open machinery hazards. Sector 4 also has one of the entrances to the EnPro Plant.