Alpha Labs - Sector 1: Union Aerospace Science Division is the fifth level of Doom 3. Built in 2095 and located on Site 2, Alpha is the UAC's center research lab. Sector 1 houses the EPD (Elemental Phase Deconstructor) and the Hydrocon. Maggots are introduced midway through the level in a cutscene. 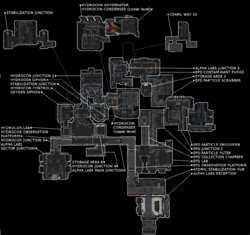 Sergeant Kelly radios in again, urging the marine to meet up with Bravo Team as soon as possible. The marine enters the Alpha Labs' reception area and clears out the zombies inside. He then uses a security terminal to open a locked door and proceeds deeper into the facility. He fights his way to the EPD Lab, where he finds that the only way to go further is through the EPD collection chamber. After clearing out the demons and zombies in the EPD control room, he opens a repair gate, giving him access to the collection chamber. The marine crawls into the collection chamber (being sure to avoid the instantly fatal EPD beam) and exits through a maintenance conduit.

The marine heads further through Alpha Labs until he runs into a fire blocking the way. He finds a monitoring station at the EPD particle emulsifier and uses it to extinguish the fire. Upon reaching the EPD contaminant purge room, he encounters a new enemy - maggots. After defeating the maggots the marine crawls through a crawl way underneath the floor and arrives near the section responsible for maintaining the Hydrocon. Eventually, he encounters a survivor, George Krietman, who warns him not to shoot the Hydrocon tanks inside the lab. The marine proceeds further into the base where he uses the PDA of the deceased Bernie Lipsitz to gain access to the Hydrocon itself. Here he catches a glimpse of Counselor Swann and Jack Campbell heading through Hydrocon Observations. The marine finally reaches the exit elevator where he defeats another ambush by maggots before taking the elevator to the next level.

Note: includes only enemies that can be fought and killed. The enemy count on Nightmare is the same as on Veteran. There are no changes in the enemy amount in the BFG Edition.

The item count on Nightmare is the same as on Veteran, except the med kits are absent.

There are also three health stations on the level: one with 100 health in reserve, one with 73 health, and another one with 44 health (all of them have 100 health in BFG Edition).