Altar of Evil is a single-level PWAD for Doom II using the ZDoom source port. It was designed by Ronald Lubbelinkhof (Dutch Devil) and uses the music track "Suspense," originally composed by Robert Prince for Doom.

Altar of Evil was acknowledged as a runner-up during the 2005 Cacowards ceremony.

The level includes eight new enemies, which are defined in a DECORATE lump with new thing types and do not replace vanilla monsters.

Sprites for existing monsters like the demon, Hell knight, baron of Hell and mancubus have also been modified. 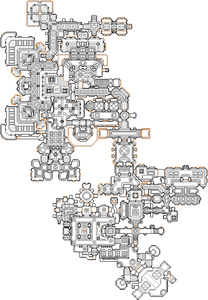 Map of Altar of Evil
Letters in italics refer to marked spots on the map. Sector, thing, and linedef numbers in boldface are secrets which count toward the end-of-level tally.

* The vertex count without the effect of node building is 19695.