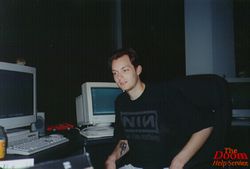 American photographed at id Software in 1995.

American McGee is a game designer best known for his work at id Software on Doom II, Quake, and Quake 2, as well as the development of American McGee's Alice with Rogue Entertainment. After meeting John Carmack by living in the same apartment complex and sharing his interest in automobiles and game design, he was hired at id as tech support.[1] He was later promoted to level designer. He worked at id Software until March 12, 1998, when he was fired by John for apparently not meeting his expectations.[2]

Once, when asked where he got his unusual name, he answered, "My mom smoked pot. She was a hippie. I'm not sure how else to put that." On his website, American had this to say of the matter: "She claims a woman she knew in college, who named her daughter 'America', inspired the name. She also tells me that she was thinking of naming me 'Obnard'. She was and always has been a very eccentric and creative person."

McGee began his career at id Software. He was a level designer and part of the programming staff for such games as Doom, Doom II, Quake, and Quake II. In 1998, he moved to Electronic Arts, where he worked as a consultant on many projects and also created his own game, American McGee's Alice. After finishing Alice, he left Electronic Arts and founded his own company, The Mauretania Import Export Company.

McGee has produced the games Scrapland, American McGee's Grimm and American McGee's Bad Day L.A.. Another game McGee was producing, American McGee's Oz, was put on hold, which McGee attributed to a lack of interest at game publishing houses for new ideas and products without established market names. McGee attempted to sell the game as a film before actually finishing it.

His stated mission is "to create a unified production method for story telling across the interactive and film industries" and of himself, he says, "I want to be the next Walt Disney, only a little more wicked."

More recently, McGee's Spicy Horse expanded to include another brand, Spicy Pony, to produce digital mobile media games for the iPhone platform. On December 17, 2010 McGee's old company The Mauretania Import Export Company was dissolved and all intellectual property was transferred to Spicy Horse.

In 2013 he opened a Kickstarter for a new game, American McGee's OZombie, however due to slow/lackluster funding the project was cancelled. Another Kickstarter for a project called Alice: Otherlands, a planned series of short films leading to a theatrical film, was announced a few days later. This reached its goal on August 4, 2013, and was officially confirmed.[3]

As of 2012, American was focusing on free-to-play games for mobile devices with BigHead Bash, Akaneiro, and Crazy Fairies.[4]

Most of the Jaguar Doom maps are conversions to the much more stringent limits of the Atari Jaguar port of original maps by John Romero, Tom Hall, and Sandy Petersen, though Tower of Babel and Hell Keep are entirely new maps instead of conversions of their original namesakes.