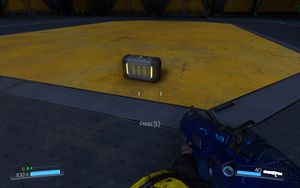 The ammo dispenser is an equipment item in Doom (2016) which is only available in SnapMap. Taking the form of a gray case with yellow markings and lights, it allows spawning a universal ammo box once per charge. Like other side arms and equipment items, the ammo dispenser has unlimited uses, depending only on its recharge timer to provide game play balance.

The ammunition pick-up spawned by the ammo dispenser is thrown out in front of the player and is not automatically collected, so in multiplayer SnapMaps—cooperative or deathmatch—it is possible for other players to collect the item.

Besides spawning an ammo dispenser in the map for the player to find and collect, it is also possible to specify it in a player loadout object and then apply that object to players either at map start or in response to an event.