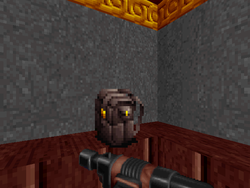 The ammo satchel is an item in Strife that doubles the ammo carrying capacity of the player as well as giving a small amount of each ammo type. It is functionally identical to Doom's backpack and Heretic's Bag of Holding.

The ammunition received per ammo satchel is:

The player can buy a satchel from the town's weapon store for 300 gold for the player's first satchel of the game, and 125 gold for any satchels after that.

In the IWAD the ammo satchel is first encountered on these maps per skill level:

The IWAD contains the following numbers of ammo satchels per skill level: