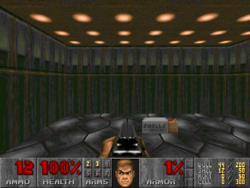 A box of shotgun shells in Doom, E1M1: Hangar. 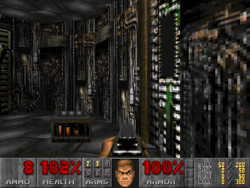 Most game weapons require ammo (ammunition) in order to be fired. While Wolfenstein 3D only had one type of unified ammo (bullets) for all its weapons, Doom introduced different types of ammunition to be used with specific weapons. Each weapon contains an amount of ammo when picked up, which may depend on the game mode being played and the skill level; additional ammo that may be picked up is provided as things placed in levels by the designers, as well as ammo dropped by defeated monsters, such as zombies in the Doom games. Duplicate weapons function as extra ammunition, when they can be picked up.

There are two basic types of ammo supply in the game: small and large. Large ammo always grants five (5) times the ammunition the equivalent small type provides, and is usually depicted as a container such as a box or quiver, or just a bigger item. In the Doom games ammo received is doubled for each type if the skill setting is set to 1 or 5 (I'm Too Young to Die or Nightmare!), while in Heretic the value of the ammo is increased by only half as much (150% of default) under equivalent settings.

The player can carry only a limited amount of each type of ammo, though certain items or powerups may raise these limits (see below). When a limit is reached, the player is temporarily unable to collect ammo pickups of that type. If he collects an ammo pickup which would raise his total stock above the maximum, he receives only enough to reach the maximum; the extra ammo disappears.