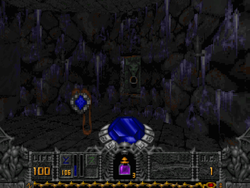 The amulet has been discovered in the Guardian of Ice. Daedolon benefits from it the most.

The Amulet of Warding is an item in Hexen that increases the character's armor class. Its appearance is that of a necklace with a leather strap and with a blue gem set in silver. The Fighter receives 1 point of armor, the Cleric receives 4, and the Mage receives 5. The item is first found in the Guardian of Ice.

In this context, "warding" refers to guarding, repelling, or a defensive enchantment. It comes from the Old English "weardian", which means to guard.

In the IWADs the amulet of warding is first encountered on these maps per skill level:

The IWADs contain the following numbers of amulets of warding per skill level: