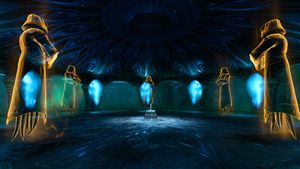 The Ancient Gods in the World Spear.

The Ancient Gods are the titular beings referred to by the titles of the single-player campaign downloadable content expansions for Doom Eternal, The Ancient Gods, Part One and Part Two. Completely mysterious and unexplained to any degree, they take the form of giant orange spirits with the same form as Seraphim. They are first seen in the core of the World Spear where the Doom Slayer obtains a shard of the spear's crystalline structure. They appear again surrounding the Dark Lord's arena in Immora, speaking an enigmatic chant, Al amect, Ivegna, before Davoth initiates his battle against the Slayer - the introductory text for the level states that "Ancient gods [will] bear witness" to the rite of combat.

After the Slayer defeats Davoth and is knocked unconscious by destroying the ultimate source of his own power, the Ancient Gods have the Seraphim place the Slayer into a sarcophagus and grant him a place of honor among the fallen gods in the Ingmore's Sanctum.