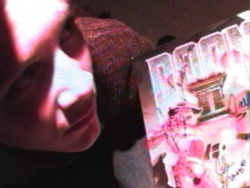 Andrew Bassett holding his prize in 1999

Andrew Bassett (better known as AndrewB) joined the Doom community in 1999, appearing as a regular visitor on Doom-related IRC channels and web forums. In November 1999, he was the winner of a contest held by Javier "Dukrous" Heredia. The prize was an autographed copy of Doom II signed by Doom creators American McGee, Shawn Green, Jay Wilbur, John Romero, and Tom Hall.

In January 2000, he appeared on the Compet-n website, posting several speed records for TNT: Evilution and Plutonia. He retired from speedrunning in 2000, the same year as his debut. Until 2009, he still held a single record: TNT MAP22: Habitat Nightmare! in 18 seconds.

In 2000, Andrew Bassett was one of four judges for Doomworld's 10 Sectors competition. On July 23, 2000, he was recruited by Andrew "Linguica" Stine to restart a popular feature on Doomworld entitled The /newstuff Chronicles. He provided reviews every Sunday until April 2002, when he resigned. He briefly returned as a reviewer in October 2004, appearing every third week. He resigned again in March 2005. During his first stint as a /newstuff reviewer, he provided occasional news updates for Doomworld. He was also once a super moderator at the Doomworld forums.

He has also contributed to the Doom community as a musician. In 2001, he composed an original MIDI music piece for the Freedoom project; it replaces the music on Map24 and is entitled "Balancing Act."

Andrew Bassett is a skilled deathmatch player. He appeared regularly on ZDaemon since May 2004. His deathmatch statistics (archived 🗺) are notably above average. As of December 18, 2005, he has accumulated more than 80,000 frags and has fragged 1.73 opponents for every frag he has received. He has been listed as high as 36th place on the ZDaemon Experience Points ladder (archived 🏛).