Angry Quilt 2 is a single-level PWAD for Doom using a limit removing source port that was released in November 2021. As a sequel to the first Angry Quilt for Doom II, it was again organized by MidnightMage and uses the music track "THREAD" by Greenjay. The map consists of 16 1024x1024 unit regions joined together into a square, with each of the 16 regions designed by a different author. 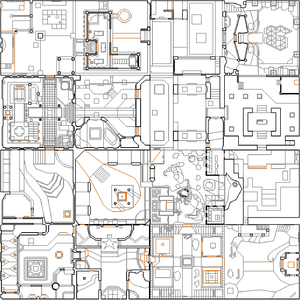 Map of Angry Quilt 2
Letters in italics refer to marked spots on the map. Sector, thing, and linedef numbers in boldface are secrets which count toward the end-of-level tally.

* The vertex count without the effect of node building is 8617.