Angry Quilt III: Big Game Hunter is a single-level PWAD for Doom II using a limit removing source port that was released in April 2022 as a sequel to Angry Quilt and Angry Quilt 2. It was organized by MidnightMage, Game and ViolentBeetle, and uses the music track "Baphomet" by xdude_gamer. The map consists of 16 1024x1024 unit regions joined together into a square, with each of the 16 regions designed by a different author. 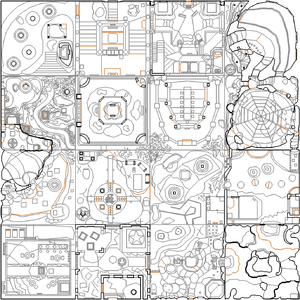 Map of Angry Quilt III: Big Game Hunter
Letters in italics refer to marked spots on the map. Sector, thing, and linedef numbers in boldface are secrets which count toward the end-of-level tally.

* The vertex count without the effect of node building is 16115.