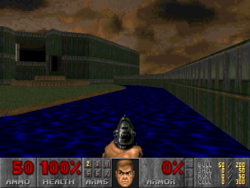 The water effect on the outside area of the level Entryway is achieved using an animated flat.

Animated flats are a feature of the Doom engine where flats (textures used on floors and ceilings) are made to animate through several frames. One of the most common uses of this is to make a floor resemble a moving liquid, such as water or lava. They are often used to indicate damaging floors.

In the freely available Knee-Deep in the Dead episode of Doom, nukage (or green slime) is the only animated flat present, depicting substances the UAC has meddled with, while the episodes for the registered version add blue water, as well as blood and lava to give places a more hellish aspect. Doom II also adds molten rock for devastated and hellish areas and brown fluids to represent sewer water and other wastes.

The names of the animated flats are built into the game executable, so these can only be changed through string substitutions with a hex editor. Some source ports allow the animation tables to be changed and extended more flexibly.

In the Doom games, the built-in animated flats are: 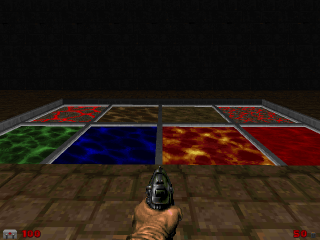 At initialization time, the engine looks up each lump named in the First column above, and links it with all following lumps, up to and including that named in the Last column.

If any of the linked names is used as the floor (or ceiling) of a sector, then the engine changes it to the next linked name about three times a second (wrapping around to the first after using the last).

In the Game column above:

The Frames and Description columns refer to the graphics distributed with the original games. It is possible to replace the animated flats using a PWAD, although the PWAD must contain all the flats to be used in the animation, and not just those replaced. If an animation is replaced, the number of frames, and of course the description, may vary.