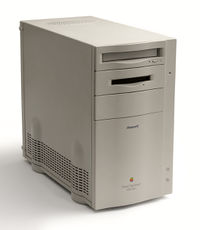 The Power Macintosh 8100/80AV, a period machine meeting the minimum specifications for Doom.

The Apple Macintosh is a brand of personal computers created by Apple Inc. beginning in 1984. During the 1990s, the standard was based on a proprietary operating system (Mac OS System 7) and the Motorola 68000 series of microprocessors. Later models replaced the Motorola 68k processor with the newer PowerPC architecture, introduced in 1994. Most applications were then shipped as "universal binaries," which included versions of the code compiled to run on either architecture.

Doom-engine games officially ported to this platform include:

Since then, the platform went through additional major standard changes:

These changes make it difficult to run 68k or PowerPC applications on a modern Intel OS X computer. Emulators such as SheepShaver may be required.