Ar Luminae is a single-level PK3 for Doom II and the GZDoom source port that was released in November 2020. It was designed by Aurelius and Kaito and uses several music tracks: "Wolverine" and "Atomic" by James Paddock (Jimmy), "Fission Dance" by Brayden Hart (AD_79), and a MIDI rendition of "Gerudo Valley" from The Legend of Zelda: Ocarina of Time. It received one of the 2020 Cacowards. The map integrates the gameplay changes of the Supercharge mod. 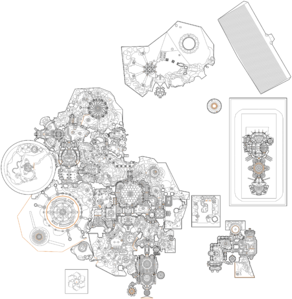 Map of Ar Luminae
Letters in italics refer to marked spots on the map. Sector, thing, and linedef numbers in boldface are secrets which count toward the end-of-level tally.