Arachna2 is a single-level PWAD for Doom II. It was designed by Bjorn Hermans and Holger Nathrath in 1995, and is a conversion of their Doom PWAD Arachna, which was released earlier in 1995. 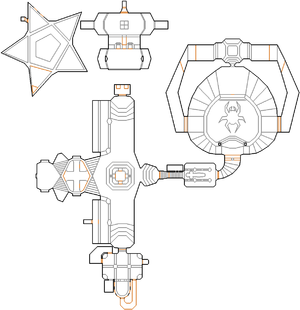 Map of Arachna2
Letters in italics refer to marked spots on the map. Sector, thing, and linedef numbers in boldface are secrets which count toward the end-of-level tally.

The sector numbers are of the updated release of the level.

As it is impossible to receive credit for secret #3 (see above), the maximum possible secret percentage on this level is 80%.

These statistics are of the updated release of the level.

* The vertex count without the effect of node building is 1025.