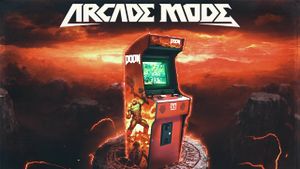 Arcade Mode is an expansion for Doom (2016) that was released with Update 4 on October 19, 2016. It incorporates all of the game's campaign levels, with the addition of a scoring system which rewards strategic and efficient gameplay. Time is kept solely for the purpose of tracking runs, as the primary objective is to stack medals (each valued equally) and keep the score multiplier as close to the maximum of 32x as possible. The highest scoring runs tend to unanimously focus on medals, combining the stun bomb followed by shotgun triple shot to the head. This consistently yields three medals per kill, the current maximum per single adversary. Inexperienced and veteran players alike can find replay value through various difficulties and means of pursuit. The goal is ultimately to surpass gold for a "Slayer" ranking. 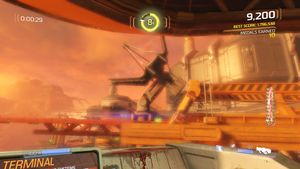 The HUD used in Arcade Mode.

Arcade Mode can be played on any of Doom's campaign levels. The core objective of each level is unchanged - get from the start to the finish and kill every monster that gets in your way - but Arcade Mode adds a score system that rewards quick gameplay, an ability to set up stylish kills while avoiding damage, and an understanding of the shortcuts and routes through each level. Arcade Mode has its own save game that is separate from a player's campaign saves.

Before choosing a level, you must select the skill level you want to play on, from I'm Too Young To Die to Ultra-Nightmare - higher skill levels are naturally harder to beat and have higher score targets, but will award more points for each scoring action. When the level starts you will have the option to alter your loadout by deciding which weapon modifications and runes to equip; in Arcade Mode all mods and runes (except Ammo Boost) are mastered and you will always have the Delta V jump-boots available, but earlier levels will limit which weapons you can equip. During gameplay, you can swap your mods and runes from the Dossier without affecting your score multiplier.

Every level begins with a countdown, following which you must complete it as fast as possible; at the end of every level is a glowing area bearing the Doom Slayer's mark that you must step into to finish the run. If you die at any point, your run ends immediately.

Close-up of a mine

Close-up of a collectible. On Ultra-Nightmare these items have a bronze aura.

Each level contains a number of large orange mines; shooting a mine will cause it to explode, killing any nearby enemies and throwing out a relic in a random direction. The relic starts off gold, but a few seconds after hitting the ground its value will be reduced to silver and then bronze, so grab it as quickly as possible. There are also two special Doomguy collectibles hidden in each level; they are normally placed off the beaten path, but finding them awards a large number of bonus points as well as an extra life that will allow you to continue your run if you die (except on Ultra-Nightmare).

Every enemy killed also adds to the multiplier gauge at the top of the screen, which starts at 1 and rises to 2, 4, 8, 16 then 32 if you kill many enemies in quick succession - keeping your multiplier as high as possible is the key to achieving high ratings. While you are using a powerup, the multiplier gauge rises steadily.

The gauge drains while you are not killing enemies and drains even faster when you take damage; the gauge will drain faster at higher multipliers. The gauge stops draining temporarily when pressing switches, taking access keys or riding elevators. In Arcade Mode, all items you find will be picked up whether or not you need them; they cannot increase your multiplier but will sustain the gauge, so picking items up tactically is vital.

Performing stylish kills will award medals, which are worth additional points; all medals have the same point value. Collecting several medals in quick succession will build up a chain which is displayed on the right side of the screen, but if you fail to earn any medals for a few seconds then the chain will end and you will receive bonus points depending on how many you collected.

Medals are also awarded for collecting bronze, silver or gold relics and Doomguys.

At the end of each run, if you have achieved a high enough score then you will receive a bronze, silver or gold rating - you will see the scores required to achieve these ratings before starting the level. Especially high scores will award the Slayer rating, but its target will be hidden until you have reached that goal. Ratings are tracked separately for each skill level.

Your best score in each stage, along with its rating and the skill level on which it was achieved, will be added to a global leaderboard where you can measure your prowess against other players.