Arcadia Demade is a single level for Doom II created by Jean-Paul LeBreton. It uses the music track "Arcadia, Arcadia Demade" created for it by John Weekley (PRIMEVAL). It consists of a reinterpretation of the Arcadia and Farmer's Market sections of BioShock, on which LeBreton was the primary designer. It is not a partial or total conversion: the level is not BioShock-themed and contains no modified resources other than a modified, blue-tinted palette, a new sky texture, and the custom music track. Instead, the aim was to adapt the general layout, theme, and atmosphere from a modern game into the much more constrained feature set of the old Doom engine.

Arcadia Demade received one of the 2010 Cacowards, and was featured in Doomworld's Top 100 Most Memorable Maps, placing 57th. 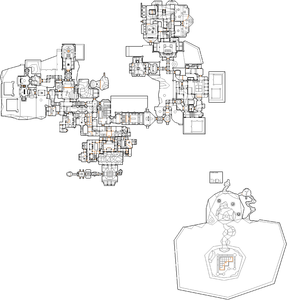 Map of Arcadia Demade
Letters in italics refer to marked spots on the map. Sector, thing, and linedef numbers in boldface are secrets which count toward the end-of-level tally.

This WAD features two built-in demos. Both require Doom II v1.9 to view them. The demos are:

* The vertex count without the effect of node building is 9853.