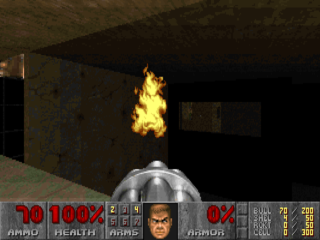 A screenshot of this bug in Doom II MAP16: Suburbs.

Due to a bug in the Doom engine, the fire from the arch-vile's attack can be spawned at the wrong location. When the fog is initially spawned, the following code is used, which contains a blatant programming error:

On the line in bold, the actor's target's x coordinate is used again where the code should instead use the target's y coordinate. This causes the initial position of the fire to be shifted on the x-y plane relative to the target of the arch-vile's attack. Should the target become hidden from the arch-vile's line of sight before the fire's position is updated, the fire will remain in this incorrect position until it dissipates completely.